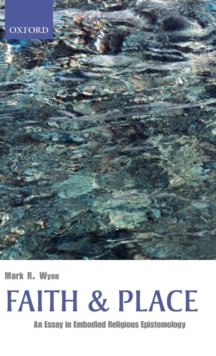 Faith and Place : An Essay in Embodied Religious Epistemology Hardback

by Mark R. (Senior Lecturer in Philosophy of Religion, Department of Theology, University of Exet Wynn

Faith and Place takes knowledge of place as a basis for thinking about the relationship between religious belief and our embodied life. Recent epistemology of religion has appealed to various secular analogues for religious belief - especially analogues drawn from sense perception and scientific theory construction.

These approaches tend to overlook the close connection between religious belief and our moral, aesthetic and otherwise engaged relationship to the material world.

By taking knowledge of place as a starting point for religious epistemology, Mark Wynn aims to throw into clearer focus the embodied, action-orienting,perception-structuring, and affect-infused character of religious understanding. This innovative study understands the religious significance of a site in terms of i. its capacity to stand for some encompassing truth about human life; ii. its conservation of historical meanings, where these meanings make a practical claim upon those located at the place at later times; and iii. its directing of the believer's attention to a sacred meaning, through enacted appropriation of the site. Wynn proposes that the notion of 'God' functions like the notion of a 'genius loci', where the relevant locus is the sum of material reality.

He argues that knowledge of God consists in part in a storied and sensuous appreciation of the significance of particular places.