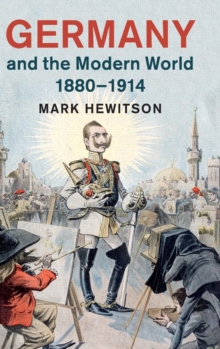 The German Empire before 1914 had the fastest growing economy in Europe and was the strongest military power in the world.

Yet it appeared, from a reading of many contemporaries' accounts, to be lagging behind other nation-states and to be losing the race to divide up the rest of the globe.

This book is an ambitious re-assessment of how Wilhelmine Germans conceived of themselves and the German Empire's place in the world in the lead-up to the First World War.

Mark Hewitson re-examines the varying forms of national identification, allegiance and politics following the creation and consolidation of a German nation-state in light of contemporary debates about modernity, race, industrialization, colonialism and military power.

Despite the new claims being made for the importance of empire to Germany's development, he reveals that the majority of transnational networks and contemporaries' interactions and horizons remained intra-European or transatlantic rather than truly global.