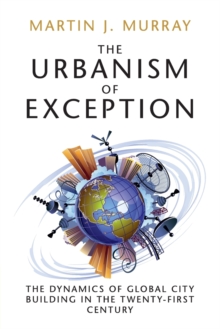 The Urbanism of Exception : The Dynamics of Global City Building in the Twenty-First Century Paperback / softback

This book challenges the conventional (modernist-inspired) understanding of urbanization as a universal process tied to the ideal-typical model of the modern metropolis with its origins in the grand Western experience of city-building.

At the start of the twenty-first century, the familiar idea of the 'city' - or 'urbanism' as we know it - has experienced such profound mutations in both structure and form that the customary epistemological categories and prevailing conceptual frameworks that predominate in conventional urban theory are no longer capable of explaining the evolving patterns of city-making.

Global urbanism has increasingly taken shape as vast, distended city-regions, where urbanizing landscapes are increasingly fragmented into discontinuous assemblages of enclosed enclaves characterized by global connectivity and concentrated wealth, on the one side, and distressed zones of neglect and impoverishment, on the other.

These emergent patterns of what might be called enclave urbanism have gone hand-in-hand with the new modes of urban governance, where the crystallization of privatized regulatory regimes has effectively shielded wealthy enclaves from public oversight and interference.