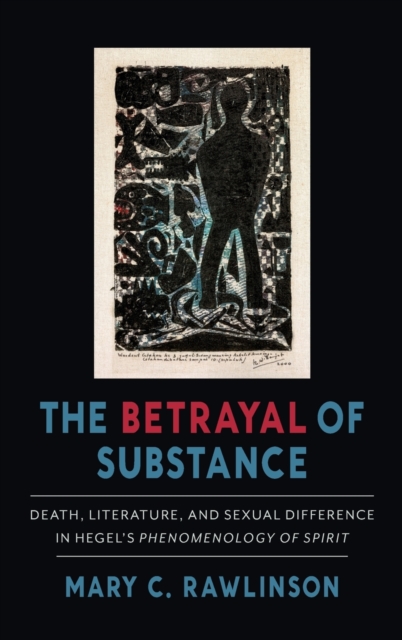 The Betrayal of Substance : Death, Literature, and Sexual Difference in Hegel's "Phenomenology of Spirit" Hardback

Major figures from Jacques Derrida and Luce Irigaray to Jean-Paul Sartre and Judith Butler were shaped in large part through their engagement with Hegel's challenging masterwork.

It unfolds a grand narrative of the ways of thinking and acting that comprise human experience.

Along the way, Hegel seeks to incorporate all the fundamental structures of human life-from political community to consciousness to selfhood-into a whole that encompasses the total movement of human knowledge and culture. Mary C. Rawlinson offers a critical reading of the Phenomenology of Spirit that exposes three crucial elisions: Hegel's effacements of sexual difference, human mortality, and literary style.

In attempting to arrive at an "absolute knowing" that would transcend all differences, Hegel discounts specificity in each of these areas in favor of a generic subject.

Rawlinson turns Hegel's critique of abstraction against him, showing how his own phenomenological analysis undermines his attempt to master difference.

Rawlinson's critique reveals Hegel's attempt to erase the difference of his own style, highlighting his images, tropes, and rhetorical strategies.

Demonstrating how the power of Hegel's phenomenological method goes beyond even Hegel's own project of a pure logic, The Betrayal of Substance is a magisterial rereading of the Phenomenology of Spirit that encompasses crucially overlooked sites of complexity and difference.