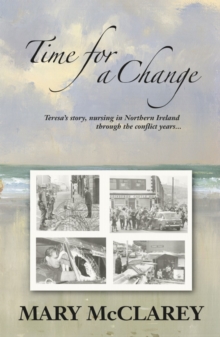 Time for a Change : Teresa's story - Nursing in Northern Ireland through the conflict years Paperback / softback

The book's protagonist, Teresa, is seventeen when the story, set in Belfast and Derry during a period of civil unrest ( between 1969 & 1979) , begins.

She is alone when her family emigrate to Australia, leaving her in the care of her aunt. Teresa, choosing a career in nursing, comes face to face with situations of social and physical extremes which are relentlessly challenging and unusually difficult, at times more reminiscent of nursing in the first world war than Britain in the 'swinging sixties'.

Whilst the story involves friends, fun and romance, there are also darker moments and reading this book offers a unique insight into the lives of ordinary people living as normal a life as they can manage, at that time. Through that perspective, Teresa and her friends share their opinions with the reader - from the need for extreme vigilance when dating soldiers to the difficulties, almost impossibility, of obtaining contraception, alongside the acceptance and recognition that Sunday is a day when complete sobriety is expected, at least in public. But this is a story of growth and resolution. It traces the heroine from a young woman, lonely and trying too hard to please, to a capable and mature adult, who not only resolves her own insecurities but proves to be a valuable support to others.

The book is peppered with an essence of pop and country and western music, and the dress and styles of the sixties and seventies will transport anyone to that period. This is a book of fiction, not a historical document, but national incidents are portrayed as accurately as possible.