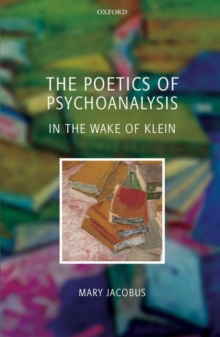 The Poetics of Psychoanalysis : In the Wake of Klein Hardback

by Mary (Professor of English, University of Cambridge) Jacobus

The Poetics of Psychoanalysis: In the Wake of Klein explores the literary aspects of the twentieth-century psychoanalytic tradition that has come to be known as British Object Relations psychoanalysis.

Focusing on Melanie Klein's legacy to psychoanalysis between the 1930s and 1970s, it deals with major figures such as Riviere, Isaacs, Winnicott, Milner, and Bion, as well as Klein's contemporary, Ella Sharpe.

Mary Jacobus breaks new ground by giving a centralplace to the literary and aesthetic concerns of the British Object Relations tradition.

Paying close attention to writing that is often side-lined by literary critics and theorists, she makes fruitful connections with particular works of literature and art, along with pressing contemporary issues. The three sections focus on the transitions, mediations, and transformations that took place in British Object Relations psychoanalysis as Klein's ideas were developed and transformed.

Situating Kleinian thought in relation to later developments and differences, while making it accessible to non-psychoanalytic readers, The Poetics of Psychoanalysis argues against the separation of British and continental traditions and for the continuing links between psychoanalysis and aesthetics. Rather than applying psychoanalytic ideas to literature and aesthetics, the book traces the British Object Relations tradition as a form of proto-modernist discourse in its own right.

Linked by a common thread of ideas and structured to reflect a roughly chronological trajectory, individual chapters can also beread as free-standing critical essays.

Aimed at literary readers, this book will also be of interest to psychoanalytic practitioners and cultural theorists.