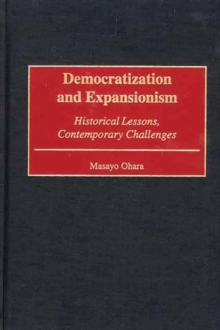 International environment is a crucial factor in determining the developmental path pursued by democratizing great powers.

Democracies are thought to be less belligerent than traditional autocracies, yet Japan, Germany, Italy became reckless expansionist powers during their democratization processes.

Based upon historical case studies, this work suggests a general pattern regarding democratization and foreign expansion by examining the degree to which the military is oriented, and the cohesion of economic social groups in the face of military assault.

Ohara then attempts to draw lessons useful for present-day democratization in China and Russia. Military social groups--the king and the nobility--dominate domestic society in a traditional autocracy.

A secure domestic position allows the sovereign to focus on international survival and dominance.

However, during the democratization period emerging economic and social groups--bourgeoisie and labor--challenge the dominance of the military social groups.

When the military regards this challenge as more threatening than international survival, the possibility for a state to become a reckless expansionist emerges.

Identifying possible causal relationships and producing realistic policy prescriptions is not enough to avert the trend, Ohara contends, one must propose multiple policy options viable at any given point, as well as various fall back plans to be implemented as necessary.