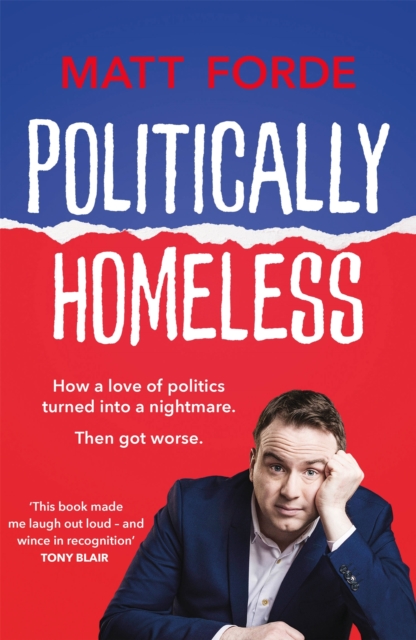 'Rarely is such an important book this funny. And rarely is such a funny book this important' - RICHARD OSMAN'The second funniest book I have read about being a Labour supporter from Blair to Brexit' - JOHN O'FARRELL'Matt Forde is brilliant at finding the comedy which often accompanies political life.

This book made me laugh out loud - and wince in recognition' - TONY BLAIR'This book is smarter and funnier than Donald Trump.

Matt Forde was so bad at politics that I'd have considered working for him' - ANTHONY SCARAMUCCI'That Matt Forde is able to make the current political shit-show funny shows his genius.

You'll be laughing too hard to notice, but this is a very clever book' - RUTH DAVIDSON'Definitely one of the books I will claim to have read this year' - JACK DEE'Absolutely brilliant.

I didn't want the book to end but I'm glad Fordy's political career did. And I mean that as both a compliment and not a compliment' - RUSSELL HOWARD-----------Part memoir, part behind-the-scenes insider view, Politically Homeless is both a fascinating and funny book for anyone who feels annoyed by the current state of politics.

Which should be around 65 million people in the UK alone. Matt Forde has been obsessed with politics ever since he was 9 years old.

Raised by a single mum on benefits in inner city Nottingham, he joined the Socialist Workers Party as soon as he could, foisted issues of Marxism Today on innocent bystanders and attended his first political party conference.

From then on, despite some career suicide moments such as chatting to the Prime Minister at Number 10 while badly drunk, Matt's whole future looked wedded to the Labour Party as he started working for MPs in dingy back rooms in Nottinghamshire. But then Labour started to fall apart, and so did Matt's sense of purpose.

With the rise of Corbyn, Brexit and Trump, his love for politics that had been so profound began to quickly crumble. Exploring themes such as tribalism, the curse of complacency and why some politicians refuse to speak normally, Politically Homeless is a hugely entertaining book of (often hilarious) personal stories and thought-provoking insights into this complicated world. And despite everything, Matt's passion is still there.

Through hosting his award-winning weekly podcast, 'The Political Party' (over 5 million downloads) involving interviews with some of politics' most powerful and notorious figures including Tony Blair, Nicola Sturgeon, Sadiq Khan, Michael Heseltine, Nigel Farage and Jacob Rees-Mogg and performing critically acclaimed stand-up comedy shows, Matt has been able to keep enough faith that politics will get better.