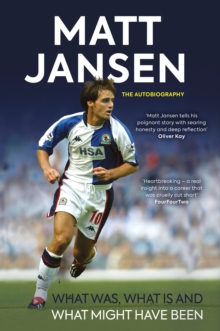 Matt Jansen: The Autobiography : What Was, What Is and What Might Have Been Hardback

Matt Jansen had it all. He was young, quick, audaciously skilful and, at the turn of the millennium, regarded as one of the most intelligent attacking talents in English football.

His potential seemed boundless. After bursting onto the scene with Carlisle in 1997 and helping his hometown club win promotion, Sir Alex Ferguson had tried to lure him to Old Trafford - but foreseeing only bench spot at United, Jansen instead opted for Steve Coppell's Crystal Palace.

In 1998, he moved to Blackburn, where he formed an attacking triumvirate with Andy Cole and Damien Duff, and proved himself to be a constant threat for Blackburn and a lethal finisher, scoring 16 times in the 2001/02 season and earning himself a place in Sven Goran-Eriksson's England squad. Widely tipped to be part of England's campaign at the World Cup in South Korea and Japan, Eriksson instead surprised many with his conservative selection of Martin Keown over the rising star; Keown wouldn't play a single minute at the tournament and England would crash out to ten-man Brazil - but Jansen didn't see a minute of it.

While England battled it out in the Far East, Jansen had taken a holiday to Rome where he was involved a serious traffic accident.

He suffered a brain haemorrhage and slipped into a six-day coma. Jansen survived and, astonishingly, he was back playing for Blackburn just four months later.

Physically he may have felt he was ready to return to top-flight football, but mentally he was nowhere near.

Battling the spectre of the accident, he was unable to recapture the instinctive genius that had previously defined him.

In an effort to reignite his career, he joined Coventry, Bolton and then Wrexham but he was never able to find his former footballing self and was finally forced to admit that his playing days were over.

He has since channelled his energies into a new career as a coach - proving to be wise, erudite and compassionate in his new role, but also a continuing object of fascination for those who wonder what might have been. This is the story of a career destined for the stratosphere, cruelly snatched away by the vagaries of fate.

Brilliant, bold, and at times brutal in its honesty, this powerful tale of shattered dreams and a life rebuilt is a testament to an inspiring, unconquered soul.