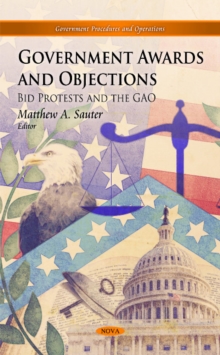 Edited by Matthew A Sauter

A bid protest is a formal, written objection to an agency's solicitation for bids or offers, cancellation of a solicitation, or award or proposed award of a contract.

Bid protests only became part of the federal procurement system in the early 20th century, more than 100 years after the federal government began purchasing goods and services.

However, Congress has authorized bid protests in recognition of their role in providing redress to disappointed bidders and offerors and in ensuring the integrity of the federal procurement process.

This book provides background on the GAO bid-protest process and examines timeframes, procedures, what issues can be protested, who can file or be a party to a GAO protest and others parameters.