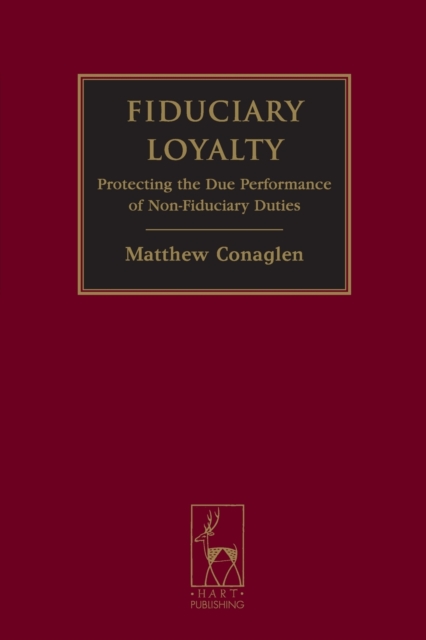 Winner of the second SLS Peter Birks Prize for Outstanding Legal Scholarship 2010. Fiduciary Loyalty presents a comprehensive analysis of the nature and function of fiduciary duties. The concept of loyalty, which lies at the heart of fiduciary doctrine, is a form of protection which is designed to enhance the likelihood of due performance of non-fiduciary duties, by seeking to avoid influences or temptations that may distract the fiduciary from providing such proper performance. In developing this position, the book takes the novel approach of putting to one side the difficult question of when fiduciary duties arise in order to focus attention instead on what fiduciary duties do when they are owed. The issue of when fiduciary duties arise can then be returned to, and considered more profitably, once a clear view has emerged of the function that such duties perform. The analysis advanced in the book has both practical and theoretical implications for understanding fiduciary doctrine. For example, it provides a sound conceptual footing for understanding the relationship between fiduciary and non-fiduciary duties, highlighting the practical importance of analysing both forms of duties carefully when considering fiduciary claims. Further, it explains a number of tenets within fiduciary doctrine, such as the proscriptive nature of fiduciary duties and the need to obtain the principal's fully informed consent in order to avoid fiduciary liability. Understanding the relationship between fiduciary and non-fiduciary duties also provides a solid foundation for addressing issues concerning compensatory remedies for their breach and potential defences such as contributory fault. The distinctive purpose that fiduciary duties serve also provides a firm theoretical basis for maintaining their separation from other forms of civil obligation, such as those that arise under the law of contracts and of torts.