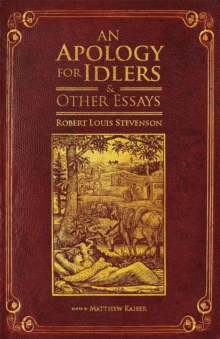 An Apology for Idlers and Other Essays Paperback / softback

This collection includes a selection of fifteen of Stevenson's most poignant, amusing and personal essays on subjects such as deep-sea diving off the coast of Scotland, child's play, death, the medieval poet-thief Francois Villon, surreal San Francisco, insomnia, and Stevenson's quirky enjoyment of "unpleasant places." An Apology for Idlers and Other Essays includes some of Stevenson's most beloved pieces and lesser-known works that have long been out of print. Stevenson called himself "a literary vagrant." His vagabond spirit and self-deprecation transformed the modern essay.

Brimming with esoterica and irony, his essays resist the industrious pace of modern life, entrancing the reader with diverting asides, celebrating the lost art of letting our minds wander. "Look at one of your industrious fellows for a moment," Stevenson beseeches us, "he sows hurry and reaps indigestion." In our increasingly fast-paced world, Stevenson's ethic of idleness can feel simultaneously necessary and alien. An Apology for Idlers and Other Essays features an introduction by editor Matthew Kaiser, which provides rich background information on both Stevenson and the titular essay.

One of the few scholarly editions of Stevenson's essays, this meticulously annotated collection is well suited for courses on Stevenson, Scottish literature, late-Victorian literature, life writing, and the art of the essay.