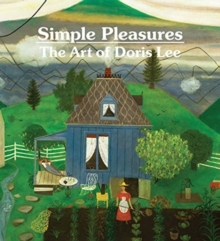 A major new book about Doris Lee, one of the top female artists - indeed among the top figurative artists, regardless of gender - in the American art world from the mid-1930s through the 1950s. Simple Pleasures presents the first major critical assessment of works by the artist Doris Lee (1904 1983).

Lee was one of the most recognised artists in America during the 1930s and 40s, and was a leading figure in the Woodstock Artist's Colony.

Her oeuvre reveals a remarkable ability to merge the reduction of abstraction with the appeal of the everyday.

In so doing, she offers one of the very rare examples of a coherent visual identity that successfully bridged the various artistic "camps" that formed with the shift in the art world in the post-World War II era.

Doris Lee exploded onto the national scene in 1935 when her painting Thanksgiving was awarded the Art Institute of Chicago's Logan Prize and instigated the Sanity in Art movement in protest.

Two years later, her painting Catastrophe was purchased by the Metropolitan Museum of Art.

Simple Pleasures explores this initial national recognition in the 1930s within the context of American Scene painting, and traces the artist's thematic interest in the simple objects and scenes of the everyday through her career.

It also examines the influence of the rise in abstraction during the late 1940s and 1950s, and the particular way in which this abstraction found resonance with Lee's long-held interest in, and collections of, folk and non-western art.

During this post-war period, Lee, like many of her American Scene colleagues, found lucrative work in the heyday of commercial advertising.

Lee's commercial commissions for patrons such as American Tobacco Company, Life magazine, Abbott Laboratories, and Associated American Artists are especially compelling in both their populist accessibility and in their deceptively sophisticated abstraction.

Sixty-five works by the artist span the 1930s through the 1960s and are comprised of paintings, drawings, prints, and commissioned commercial designs in fabric and pottery.

Included are advertisements by companies that commissioned images from Lee, and photographs that contextualise the artist's work within the Woodstock artist's community. AUTHORS: Barbara L. Jones is chief curator, The Westmoreland Museum of American Art, Greensburg, PA, and the author of Samuel Rosenberg: Portrait of a Painter (2003).

Melissa Wolfe is curator of American Art, St. Louis Art Museum, and co-editor of Reflections: The American Collection of the Columbus Museum of Art (2019).

John Fagg is professor of American Studies, University of Birmingham, UK, and author of 'That Abused Word: Genre': The 1930s Genre Painting Revival in The Space Between: Literature and Culture 1914-1945 (2011).