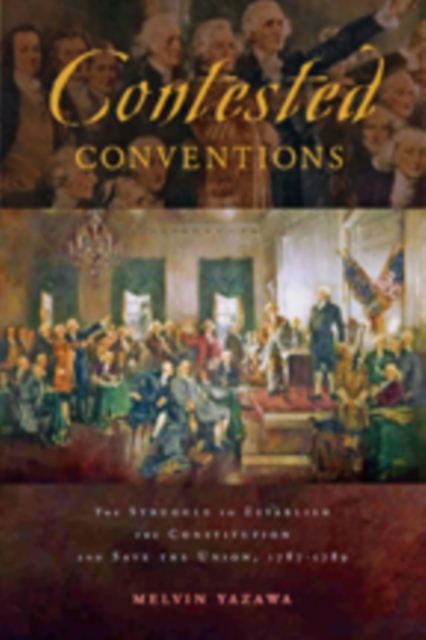 Contested Conventions : The Struggle to Establish the Constitution and Save the Union, 1787-1789 Paperback / softback

There is perhaps no more critical juncture in American history than the years in which Americans drafted the federal Constitution, fiercely debated its merits and failings, and adopted it, albeit with reservations.

In Contested Conventions, senior historian Melvin Yazawa examines the political and ideological clashes that accompanied the transformation of the country from a loose confederation of states to a more perfect union. Treating the 1787-1789 period as a whole, the book highlights the contingent nature of the struggle to establish the Constitution and brings into focus the overriding concern of the framers and ratifiers, who struggled to counter what Alexander Hamilton identified as the "centrifugal" forces driving Americans toward a disastrous disunion.

This concern inspired the delegates in Philadelphia to resolve through compromise the two most divisive confrontations of the Constitutional Convention-representation in the new Congress and slavery-and was instrumental in gaining ratification even in states where Antifederalist delegates comprised a substantial majority. Arguing that the debates over ratification reflected competing ideas about the meaning of American nationhood, Yazawa illuminates the nature of the crisis that necessitated the meeting at Philadelphia in the first place. Contested Conventions is a cohesive and compelling account of the defining issues that led to the establishment of the Constitution; it should appeal to history students and scholars alike.