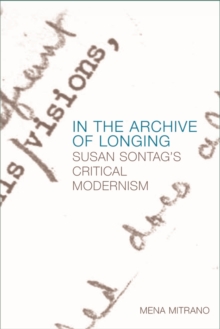 In the Archive of Longing : Susan Sontag's Critical Modernism Hardback

Mena Mitrano explores three core ideas in this study: the confusion of terms between modernism and theory; the concept of an `unwritten theory' suggested by Sontag's subterranean engagement with the foremost theorists of our time (Derrida, Foucault, Deleuze, Lacan, Jameson and others) in the rawness of her journals and notebooks; and Sontag's identity as a non-traditional philosopher, through the extraordinary discipleship to Walter Benjamin.

The book is driven by new archival research and will have a multi-layered impact, changing our perception of Sontag as a post-Cold War public intellectual as well as interrogating key concepts in the Humanities.

Key Features Original study of Susan Sontag's contribution to the development of critical thoughtOpens new avenues for research in the expanding field of new modernist studies and in the field of criticismDiscusses Sontag's collaboration with Walter Benjamin which reopens the question of the author and encourages an understanding of this concept from a psychoanalytic perspective, as a transgenerational phenomenonIncludes a discussion of the role of the American avant-garde in Sontag's abandonment of philosophy and in her turn to a pioneering, more theoretical literary criticism