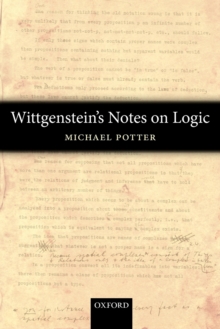 Wittgenstein's philosophical career began in 1911 when he went to Cambridge to work with Russell.

He compiled the Notes on Logic two years later as a kind of summary of the work he had done so far.

Russell thought that they were 'as good as anything that has ever been done in logic', but he had Wittgenstein himself to explain them to him.

Without the benefit of Wittgenstein's explanations, most later scholars have preferred to treat the Notes solely as aninterpretative aid in understanding the Tractatus (which draws on them for material), rather than as a philosophical work in their own right.

Michael Potter unequivocally demonstrates the philosophical and historical importance of the Notes for the first time.

By teasing out the meaning of key passages, he shows how many of the most important insights in the Tractatus they contain.

He discusses in detail how Wittgenstein arrived at these insights by thinking through ideas he obtained from Russell and Frege. And he uses a challenging blend of biography and philosophy to illuminate the methods Wittgenstein used in his work.

The book features the complete text of the Notes in a critical edition, with a detailed discussion of the circumstances in which they were compiled, leading to a new understanding of how they should be read.