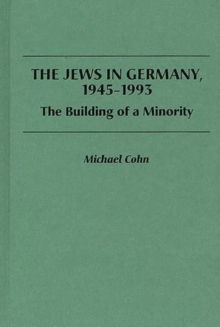 Most Jews who now live in Germany have lived elsewhere.

They are neither the remnant of those who survived the Holocaust nor those who are in transit to Israel or the United States.

They are a disparate but vibrant and growing community of over 80,000 people.

Forty thousand of them are members of official Jewish communities in today's Germany. Because of the Nazi past, this proportionately small number of individuals plays an out-of-scale role in German politics and world consciousness.

As a study in the formation of minority communities within European national matrices, Cohn's work has interest for sociologists, political scientists, and anthropologists as well.

It is the only published work on the Jewish community in Germany today.