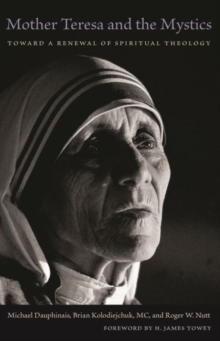 Mother Teresa and the Mystics : Toward a Renewal of Spiritual Theology Paperback / softback

Mother Teresa was one of those rare figures in history who enjoyed a wide and solid reputation of holiness during her lifetime.

She became-for Catholics, Christians, and those of other faiths or even of none-a symbol of kindness, compassion, and tender care of the poorest people throughout the world.

Known as a joyful and generous soul, Mother Teresa inspired countless persons to experience the "joy of loving," as she liked to say, through their own acts of love and compassion. It thus came as a total surprise to everyone, including the members of her own religious family, the Missionaries of Charity, that Mother Teresa experienced nearly fifty years of what she called "the darkness." When a book of her private letters, Come, be My Light, was published in 2007, it caused a sensation.

It received worldwide media attention, including as the cover story of Time magazine.

People struggled to understand it; many misunderstood it, some entirely!As the president of Ave Maria University, Jim Towey, tells us in the introduction, many questions abound about Mother Teresa's darkness: "What are we to make of the spiritual darkness that enshrouded Mother Teresa so tightly?

Could the words and experiences of this little Albanian woman with no advanced formal education have anything to say to the challenges the twenty-first century presents?"Ave Maria University gathered theologians to begin answering these questions and others.

The resulting symposium provided the contents of this book.

The first such assembly of scholarly work on the topic, Mother Teresa and the Mystics offers readers the opportunity to enter much more deeply into the interior-even mystical-world of St.