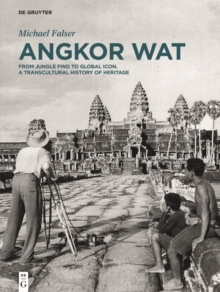 This book unravels the formation of the modern concept of cultural heritage by charting its colonial, postcolonial-nationalist and global trajectories.

By bringing to light many unresearched dimensions of the twelfth-century Cambodian temple of Angkor Wat during its modern history, the study argues for a conceptual, connected history that unfolded within the transcultural interstices of European and Asian projects.

With more than 1,400 black-and-white and colour illustrations of historic photographs, architectural plans and samples of public media, the monograph discusses the multiple lives of Angkor Wat over a 150-year-long period from the 1860s to the 2010s. Volume 1 (Angkor in France) reconceptualises the Orientalist, French-colonial 'discovery' of the temple in the nineteenth century and brings to light the manifold strategies at play in its physical representations as plaster cast substitutes in museums and as hybrid pavilions in universal and colonial exhibitions in Marseille and Paris from 1867 to 1937. Volume 2 (Angkor in Cambodia) covers, for the first time in this depth, the various on-site restoration efforts inside the 'Archaeological Park of Angkor' from 1907 until 1970, and the temple's gradual canonisation as a symbol of national identity during Cambodia's troublesome decolonisation (1953-89), from independence to Khmer Rouge terror and Vietnamese occupation, and, finally, as a global icon of UNESCO World Heritage since 1992 until today.