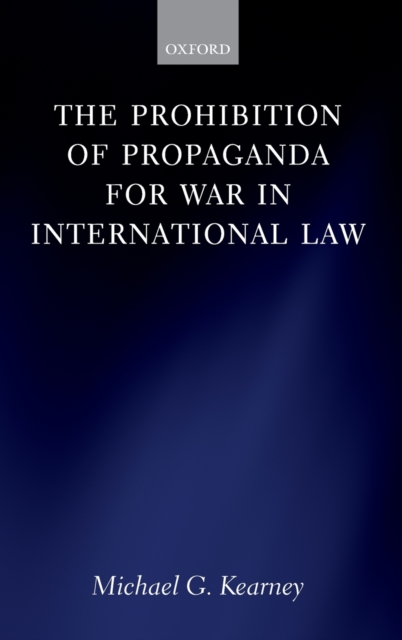 The Prohibition of Propaganda for War in International Law Hardback

Bereft of any comprehensive analysis and subject to little if any sustained debate, the tangential location of the prohibition of propaganda for war in the discourse of international law has resulted in a situation where state conduct in this area too often appears to be acting in a legal vacuum.

In proposing a more robust role for international law in responding to what is a matter of widespread public concern, the book analyses the context in which internationallaw first came to be concerned with propaganda for war in the years following the First World War.

With the establishment of the United Nations and the corresponding development of international human rights law, the issue of the prohibition of propaganda for war in both human rights law andinternational criminal law became a highly significant, yet frequently divisive matter during the Cold War.

Drawing on primary materials from the League of Nations to the Rome Statute of the International Criminal Court, this book makes the case for the revitalisation of a provision of international law which can be fundamental to the prevention of war.

The book examines international human rights law, the travaux preparatoires to the International Covenant on Civil and Political Rights, communications between the Human Rights Committee and states parties to the Covenant, statepractice, and international criminal law.

Drawing on the manner by which international tribunals from Nuremberg to The Hague have approached the matter of individual criminal responsibility for 'incitement to crimes of an international dimension', the book proposes that 'direct and public incitement to aggression' beincluded as a crime in the Rome Statute of the International Criminal Court.