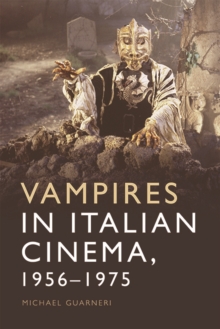 Positioning itself at the intersection of Italian film history, horror studies and cultural studies, this fascinating book asks why, and how, was the protean, transnational and transmedial figure of the vampire appropriated by Italian cinema practitioners between 1956 and 1975? The book outlines both the 1945-85 industrial context of Italian cinema and the political, economic and sociocultural context of the Italian Republic, from post-war reconstruction to the austerity of the mid-1970s.

Using case studies of films by directors such as Mario Bava and Riccardo Freda, it also delves into lesser-known gems of Italian psychotronic cinema from the 1960s and 1970s, like L'amante del vampiro (The Vampire and the Ballerina) and Riti, magie nere e segrete orge nel Trecento . . . (The Reincarnation of Isabel). With original research into hitherto unpublished film production data, censorship data, original screenplays, trade papers, film magazines and vampire-themed paraliterature, the book strongly argues for the cultural legitimacy of Italian film genres like horror, adventure, comedy and erotica, whose study has so far been neglected in favour of the Italian auteur cinema of the 1940s neorealists and their later followers.