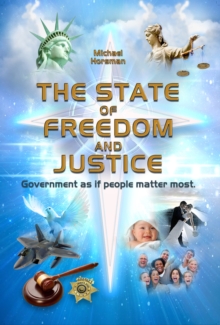 The State of Freedom and Justice : Government as If People Matter Most Paperback / softback

As the author explains, the book is the result of 'a youthful attempt to sort out ideas about politics and government', which began 35 years ago.

An independent thinker, he has taken a multi-disciplinary approach in seeking answers, reading widely in the realms of Politics and Economics, Sociology and Philosophy, History and Law.

This approach has led to some surprising insights which do not fit into the left/right categorisation of political analysis.

Comparing the consensus theory of the origin of the state, popularised by Rousseau, with the less well-known conflict theory as expounded by Franz Oppenheimer, the author argues that most states are likely to have been established by the conquest of one class by another, or one tribe by another.

Thus the modern state is characterised by a ruling class exercising the coercive power of the state to pursue its interests, limiting freedom and justice for the rest in varying degrees.

The 20th century provides plenty of evidence of the state being our greatest enemy, but it is not only totalitarian states which limit freedom: in demanding more and more of the welfare state, we are in fact forging the chains which bind us. A surprising development from this line of thought has been the recognition that taxation is part of that exercise of coercive power.

It is a compulsory levy on a citizen's earnings and wealth to pay for government, but the author has shown there is a way in which government can be funded without the need to resort to taxation.

A corollary of this change in the way government is funded offers an economic remedy to reduce inequality in both incomes and wealth, in effect killing two birds with one stone.

As a major function of the state is to maintain law and order, the author, following Herbert Spencer argues that access to the courts should be free, so that there is not one law for the rich and another for the poor.

Though these ideas are rather radical, they are mutually consistent and dovetail neatly to maximise the state of freedom for the individual and justice for all.