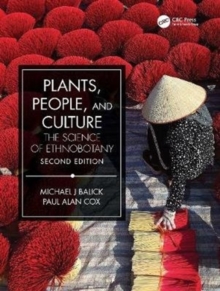 Plants, People, and Culture : The Science of Ethnobotany Paperback / softback

Is it possible that plants have shaped the very trajectory of human cultures?

Using riveting stories of fieldwork in remote villages, two of the world's leading ethnobotanists argue that our past and our future are deeply intertwined with plants.

One out of four prescription drugs, for example, were discovered from plants used by traditional healers.

Objects as common as baskets for winnowing or wooden boxes to store feathers were ornamented with traditional designs demonstrating the human ability to understand our environment and to perceive the cosmos.

Throughout the world, the human body has been used as the ultimate canvas for plant-based adornment as well as indelible design using tattoo inks.

Plants also garnered religious significance, both as offerings to the gods and as a doorway into the other world.

Indigenous claims that plants themselves are sacred is leading to a startling reformulation of conservation.

The authors argue that conservation goals can best be achieved by learning from, rather than opposing, indigenous peoples and their beliefs.

KEY FEATURES* An engrossing narrative that invites the reader to personally engage with the relationship between plants, people, and culture* Full-color illustrations throughout-including many original photographs captured by the authors during fieldwork* New to this edition-"Plants That Harm," a chapter that examines the dangers of poisonous plants and the promise that their study holds for novel treatments for some of our most serious diseases, including Alzheimer's and substance addiction* Additional readings at the end of each chapter to encourage further exploration* Boxed features on selected topics that offer further insight* Provocative questions to facilitate group discussionDesigned for the college classroom as well as for lay readers, this update of Plants, People, and Culture entices the reader with firsthand stories of fieldwork, spectacular illustrations, and a deep respect for both indigenous peoples and the earth's natural heritage.