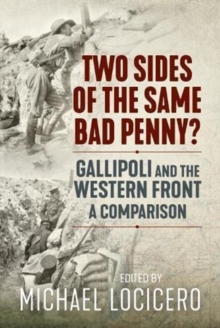 Two Sides of the Same Bad Penny : Gallipoli and the Western Front, a Comparison Hardback

In 1915, Great Britain and her Empire found itself engaged at Gallipoli and on the Western Front.

Lacking the wherewithal to conduct both campaigns effectively, the year was one of theatre-wide learning and experiential exchange that continued to the armistice.

The various topics include command and control, military technology, logistics and British and Dominion forces.