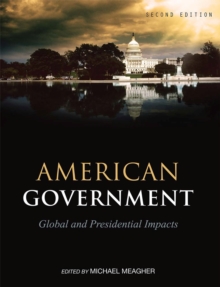 American Government: Global and Presidential Impacts demonstrates how the office of the presidency has shaped domestic politics and become a key player in bringing about globalization.

The book explores the ways presidential politics and decision-making impact people domestically and internationally. The material addresses topics such as the relationship between the presidency and the media, the foundations of world citizenship, and the recent torture memos.

This edition features new readings on topics such as the 2016 presidential election, the Cuban Missile Crisis, and the 2003 Invasion of Iraq.

Encompassing events both past and contemporary, American Government challenges readers to consider how presidents knowingly and inadvertently, for good or for ill, exert their influence on a global scale. This versatile text offers readers a fresh perspective on American government, aspects of the presidency, and the many ways the world is linked.

It is well suited to courses on American government, introductory political science, the American presidency, and the executive process.

As a cost-effective alternative to standard texts, American Government is also a useful addition to American government courses that seek to place material in comparative perspective.