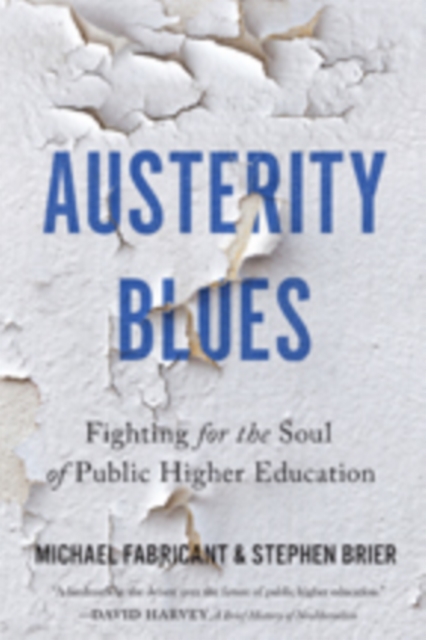 Public higher education in the postwar era was a key economic and social driver in American life, making college available to millions of working men and women.

Since the 1980s, however, government austerity policies and politics have severely reduced public investment in higher education, exacerbating inequality among poor and working-class students of color, as well as part-time faculty.

In Austerity Blues, Michael Fabricant and Stephen Brier examine these devastating fiscal retrenchments nationally, focusing closely on New York and California, both of which were leaders in the historic expansion of public higher education in the postwar years and now are at the forefront of austerity measures.

Fabricant and Brier describe the extraordinary growth of public higher education after 1945, thanks largely to state investment, the alternative intellectual and political traditions that defined the 1960s, and the social and economic forces that produced austerity policies and inequality beginning in the late 1970s and 1980s. A provocative indictment of the negative impact neoliberal policies have visited on the public university, especially the growth of class, racial, and gender inequalities, Austerity Blues also analyzes the many changes currently sweeping public higher education, including the growing use of educational technology, online learning, and privatization, while exploring how these developments hurt students and teachers.

In its final section, the book offers examples of oppositional and emancipatory struggles and practices that can help reimagine public higher education in the future. The ways in which factors as diverse as online learning, privatization, and disinvestment cohere into a single powerful force driving deepening inequality is the central theme of the book.

Incorporating the differing perspectives of students, faculty members, and administrators, the book reveals how public education has been redefined as a private benefit, often outsourced to for-profit vendors who "sell" education back to indebted undergraduates.

Over the past twenty years, tuition and related student debt have climbed precipitously and degree completion rates have dropped. Not only has this new austerity threatened public universities' ability to educate students, Fabricant and Brier argue, but it also threatens to undermine the very meaning and purpose of public higher education in offering poor and working-class students access to a quality education in a democracy.

Synthesizing historical sources, social science research, and contemporary reportage, Austerity Blues will be of interest to readers concerned about rising inequality and the decline of public higher education.