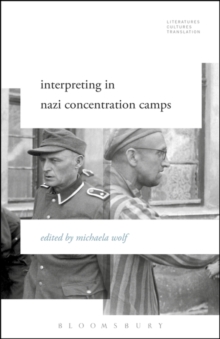 This significant new study is concerned with the role of interpreting in Nazi concentration camps, where prisoners were of 30 to 40 different nationalities.

With German as the only official language in the lager, communication was vital to the prisoners' survival.

While in the last few decades there has been extensive research on the language used by the camp inmates, investigation into the mediating role of interpreters between SS guards and prisoners on the one hand, and among inmates on the other, has been almost nonexistent. On the basis of Primo Levi's considerations on communication in the Nazi concentrationary system, this book investigates the ambivalent role of interpreting in the camps.

One of the central questions is what the role of interpreting was in the wider context of shaping life in concentration camps. And in what way did the knowledge of languages, and accordingly, certain communication skills, contribute to the survival of concentration camp inmates and of the interpreting person?