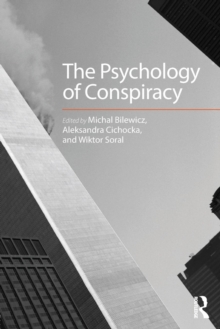 The Psychology of Conspiracy Paperback / softback

Why did the third World Trade Center building (WTC7) collapse on September 11th , even though it was not struck by any aircraft?Why did Princess Diana's "drunk" driver look sober as he climbed into the car minutes before their deadly accident?

Could a slender birch tree really have caused the plane crash which killed the President of Poland in 2010?`Conspiracy thinking' - the search for explanations of significant global events in clandestine plots, suppressed knowledge and the secret actions of elite groups - provides simple and logical answers to the social doubts and uncertainties that occur at times of major national and international crises.

Contemporary social psychology seeks to explain the human motivation to create, share and receive conspiracy theories, and to shed light on the consequences of these theories for people's social and political functioning. This important collection, written by leading researchers in the field, is the first to apply quantitative empirical findings to the subject of conspiracy theorizing.

The first section of the book explores conspiracy theories in the context of group perception and intergroup relations, paying particular attention to anti-Semitic conspiracy stereotypes.

It then goes on to examine the relationship between an individual's political ideology and the degree to which they engage in `conspiracy thinking'.

The concluding part of the book considers the explanatory power of conspiracy, focusing on the link between social paranoia and digital media, and highlighting the social, political, and environmental consequences of conspiracy theories. The Psychology of Conspiracy will be of great interest to academics and researchers in social and political psychology, and a valuable resource to those in the fields of social policy, anthropology, political science, and cultural studies.