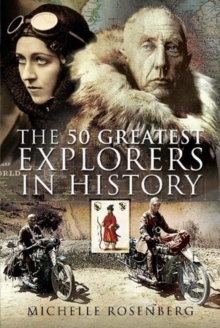 This is a book about one of the first recorded pilgrims who climbed Mount Sinai; it's about Amelia Earhart, the famous American aviator whose story and disappearance continues to capture the world's imagination.

It's the story of a doomed expedition to discover the North West Passage, and the tale of Marco Polo, who remained at the court of the Kublai Khan for an incredible 17 years. 'Great Explorers' brings to life the pioneers in aviation flying thousands of miles with the most basic of maps in open cock-pits, exposed to the elements and the unrelenting smell of petrol fumes.

They travel by steamboat, on horse-back, by rickshaw, motorbike, train, swim with piranhas, embark into black nothingness in new space craft, explore by jeep, yachts, tea boats and elephants, disguise themselves as men, take canoes and use innovative, advanced technological scuba equipment. Going where in many cases, no man or woman had ever gone before, some women featured in 'Great Explorers' were often denied respect, acknowledgement or recognition and they determined to break the 'mens club' mentality of global exploration from which they were excluded.

Marco Polo:"This desert is reported to be so long that it would take a year to go from end to end; and at the narrowest point it takes a month to cross it.

It consists entirely of mountains and sands and valleys.

There is nothing at all to eat."