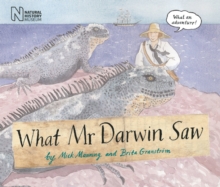 In 1831, at only 22 years old, Darwin was offered the position of Naturalist on HMS Beagle's world voyage. He was set to become a clergyman but returns after five years at sea an inspired genius. This book follows the journey of HMS Beagle, showing life on-board the ship for Darwin, the captain, crew and the expedition's artist.

The reader sees Darwin discovering and observing insect life in Brazil, fossils in Argentina , earthquakes in Chile and turtles in the Galapagos Islands.

The reader is therefore able to follow the steps which led to Darwin's inspired theory of evolution, while also showing the adventures and escapades he had during the voyage. A fascinating and colourful story of Darwin's life, this book also introduces young readers to one of the world's most important scientists and his discoveries.

It concludes with a simple explanation of the theory of evolution.

Written by an outstanding team in the field of children's non-fiction, this is a book to enlighten and inspire young readers.To watch a video describing Darwin's theory of evolution click