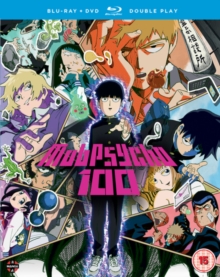 All the episodes from the first season of the Japanese anime that follows inconspicuous schoolboy Shigeo Kageyama (voice of Setsuo Ito), nicknamed Mob, who has formidable psychic powers and suppresses his emotions in order to inhibit the potential danger of his skills.

The episodes are: 'Self-Proclaimed Psychic: Reigen Arataka - And Mob', 'Doubts About Youth - The Telepathy Club Appears', 'An Invitation to a Meeting - Simply Put, I Just Want to Be Popular', 'Idiots Only Event - Kin', 'Ochimusha - Psychic Powers and Me', 'Discord - To Become One', 'Exaltation - I've Obtained Loss', 'The Older Brothers Bows - Destructive Intent', 'Claw - 7th Division', 'The Heinous Aura: Mankind', 'Master: Leader' and 'Mob and Reigen - A Giant Tsuchinoko Appears'.