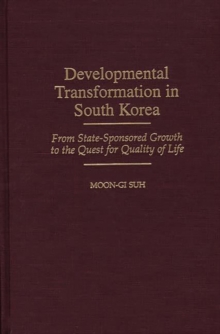 Developmental Transformation in South Korea : From State-sponsored Growth to the Quest for Quality of Life Hardback

South Korea's path toward a higher quality of life has been a dynamic process, Suh shows, shaped by historical contingencies, some immutable logic of capitalist development, and a dialectical relationship between the state and Korean civil society.

Debunking the illusion of democracy and myths of self-regulating capitalism in South Korea, Suh shows that a growth machine is not a panacea for the development of human beings and their quality of life.

If instead the raison d'etre of quality of life depended upon a robust civil society operating under fair rules of the game by the state, the developmental road would be more promising. Suh seeks to test the hypothesis that the rising tide of economic growth will raise all boats in the Korean sea, remapping its structural pressure points which have been submerged at high tide.

Given the high levels of economic growth generated by state intervention, any demand of distributive justice necessitates egailitarian reforms.

As Suh shows, the present South Korean situation goes straight to the heart of theoretical questions about the enduring structures of capitalism, and its promise to improve average living standards and to link the redistribution of economic rewards to enhanced economic performance of the system as a whole. South Korea's path to quality of life has been a dynamic process, Suh shows, determined by historical contingencies, with some immutable logic of capitalist development, and a dialectical relationship between the state and Korean civil society.

A study of particular interest to scholars, researchers, and policy makers concerned with political economy and social-economic development and East Asian Studies.