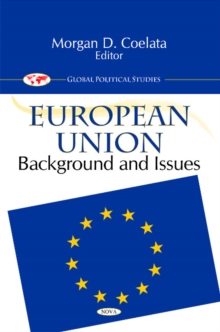 The European Union (EU) is an economic and political partnership that represents a unique form of co-operation among its 27 sovereign member states.

The Union is the latest stage of a process of integration begun after World War II to promote peace, stability, and economic prosperity in Europe.

The United States have strongly supported the EU and its progenitors as a means to foster democratic states and robust trading partners.

The United States and the EU share a large, mutually beneficial trade and investment relationship.

The global financial crisis and recession has challenged both sides to forge a common response.

The United States and EU have a number of lingering trade disputes, but have led the push to liberalise world trade, and have sought to reduce non-tariff and regulatory barriers in the transatlantic workplace.

This book provides an overview of these issues.