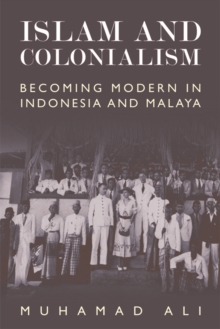 Islam and Colonialism : Becoming Modern in Indonesia and Malaya Hardback

Focusing on Indonesia and Malaysia, this book looks at how European colonial and Islamic modernising powers operated in the common and parallel domains of government and politics, law and education in the first half of the 20th century.

It shows that colonialisation was able to co-exist with lslamisation, arguing that Islamic movements were not necessarily antithetical to modernisation, nor that Western modernity was always anathema to Islamic and local custom.

Rather, in distinguishing religious from worldly affairs, they were able to adopt and adapt modem ideas and practices that were useful or relevant while maintaining the Islamic faith and ritual that they believed to be essential.

In developing an understanding of the common ways in which Islam was defined and treated in Indonesia and Malaysia, we can gain a new insight to Muslim politics and culture in Southeast Asia.