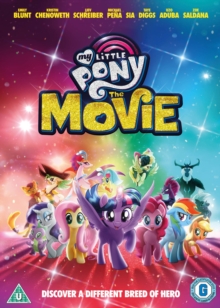 My Little Pony: The Movie DVD

Germain) - are forced to act quickly in order to counter the threat.

With the Storm King's fleet, led by the ruthless Tempest Shadow (Emily Blunt), intent on conquering all of Equestria, the ponies must embark on an epic journey in a bid to save their beloved home and rescue their friends.