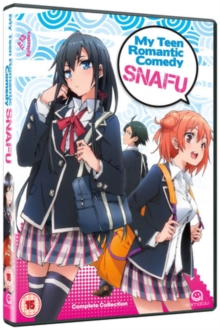 All 13 episodes of the Japanese anime comedy series based on the light novels by Wataru Watari.

Set in Soubu High School, loner Hachiman Hikigaya (voice of Takuya Eguchi) is troubled when he is forced to work with his classmates Yukino Yukinoshita (Saori Hayami) and Yui Yuigahama (Nao Tôyama).

The episodes are: 'Youth Romantic Comedy Is Wrong, As I Expected', 'All People Surely Have Their Own Worries', 'Sometimes the God of Rom-Coms Does Nice Things', 'In Other Words, He Doesn't Have Many Friends', 'Once Again, He Turns Back On the Path from Whence He Came', 'His Beginning With Her Finally Ends', 'Anyway, Getting No Rest, Even Though It's Summer Break, Just Isn't Right', 'One Day, They Will Learn the Truth', 'For the Third Time, He Turns Back On the Path from Whence He Came', 'The Distance Between Them Remains Unchanged As the Festival Is Becoming a Carnival', 'And So the Curtain On Each Stage Rises, and the Festival Is Festivaling Its Very Best', 'Thus, His and Her and Her Youth Continues to Be Wrong' and 'And So, Their Festival Will Never End'.