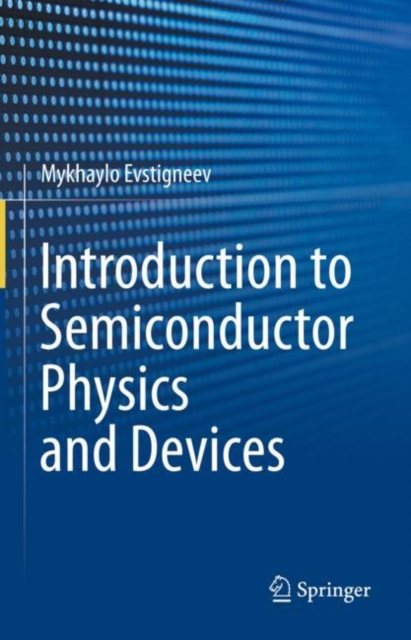 This classroom-tested textbook provides a self-contained one-semester course in semiconductor physics and devices that is ideal preparation for students to enter burgeoning quantum industries.

Unlike other textbooks on semiconductor device physics, it provides a brief but comprehensive introduction to quantum physics and statistical physics, with derivations and explanations of the key facts that are suitable for second-year undergraduates, rather than simply postulating the main results.

The book is structured into three parts, each of which can be covered in around ten lectures.

The first part covers fundamental background material such as quantum and statistical physics, and elements of crystallography and band theory of solids.

Since this provides a vital foundation for the rest of the text, concepts are explained and derived in more detail than in comparable texts.

For example, the concepts of measurement and collapse of the wave function, which are typically omitted, are presented in this text in language accessible to second-year students.

The second part covers semiconductors in and out of equilibrium, and gives details which are not commonly presented, such as a derivation of the density of states using dimensional analysis, and calculation of the concentration of ionized impurities from the grand canonical distribution.

Special attention is paid to the solution of Poisson's equation, a topic that is feared by many undergraduates but is brought back down to earth by techniques and analogies from first-year physics.

Finally, in the third part, the material in parts 2 and 3 is applied to describe simple semiconductor devices, including the MOSFET, the Schottky and PN-junction diodes, and optoelectronic devices.

With a wide range of exercises, this textbook is readily adoptable for an undergraduate course on semiconductor physics devices, and with its emphasis on consolidating and applying knowledge of fundamental physics, it will leave students in engineering and the physical sciences well prepared for a future where quantum industries proliferate.