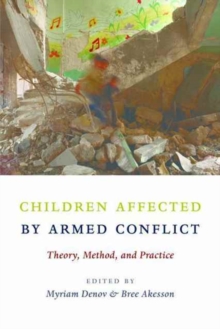 Drawing from empirical studies in eleven conflict-ridden countries, including Pakistan, Sri Lanka, Thailand, Colombia, Uganda, Palestine, Somalia, Liberia, Sierra Leone, Sudan, and South Sudan, Children Affected by Armed Conflict crosses cultures and contexts to capture a range of perspectives on the realities of armed conflict and its aftermath for children. Children Affected by Armed Conflict upends traditional views by emphasizing the experience of girls as well as boys, the unique social and contextual backgrounds of war-affected children, and the resilience and agency such children often display.

Including children who are victims of, participants in, and witnesses to armed conflict in their analyses, the contributors to this volume highlight innovative methodologies that directly involve war-affected children in the research process.

This validates the perspectives of children and ensures more effective outcomes in postwar reintegration and recovery. Deficits-based models do not account for the realities many war-affected children face.

The alternative approaches presented in this edited collection-which acknowledge the realities of both trauma and resilience-aim to generate more effective policies and intervention strategies in the face of a growing global public health crisis.