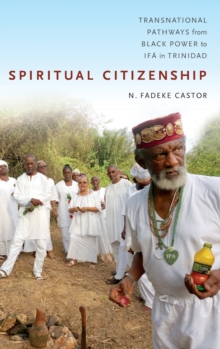 In Spiritual Citizenship N. Fadeke Castor employs the titular concept to illuminate how Ifa/Orisha practices informed by Yoruba cosmology shape local, national, and transnational belonging in African diasporic communities in Trinidad and beyond.

Drawing on almost two decades of fieldwork in Trinidad, Castor outlines how the political activism and social upheaval of the 1970s set the stage for African diasporic religions to enter mainstream Trinidadian society.

She establishes how the postcolonial performance of Ifa/Orisha practices in Trinidad fosters a sense of belonging that invigorates its practitioners to work toward freedom, equality, and social justice.

Demonstrating how spirituality is inextricable from the political project of black liberation, Castor illustrates the ways in which Ifa/Orisha beliefs and practices offer Trinidadians the means to strengthen belonging throughout the diaspora, access past generations, heal historical wounds, and envision a decolonial future.