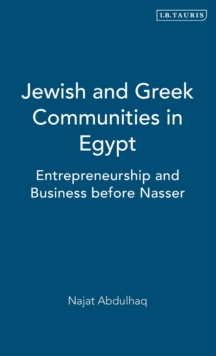 Jewish and Greek Communities in Egypt : Entrepreneurship and Business before Nasser Hardback

In the years following Nasser's rise to power, the demographic landscape and the economy of Egypt underwent a profound change.

Related to the migration of diverse communities, that had a distinguished role in Egyptian economy, from Egypt, these shifts have mostly been discussed in the light of postcolonial studies and the nationalisation policies in the wider region.

Najat Abdulhaq focuses instead on the role that these minorities had in the economy of pre-Nasser Egypt and, by giving special attention to the Jewish and Greek communities residing in Egypt, investigates the dynamics of minorities involved in entrepreneurship and business.

With rigorous analysis of the types of companies that were set up, Abdulhaq draws out the changes which were occurring in the political and social sphere at the time.

This book, whilst primarily focused on the economic activities of these two minority communities, has implications for an understanding analysis of the political, the juridical, the intellectual and the cultural trends at the time.

It thus offers vital analysis for those examining the economic history of Egypt, as well as the political and cultural transformations of the twentieth century in the region.