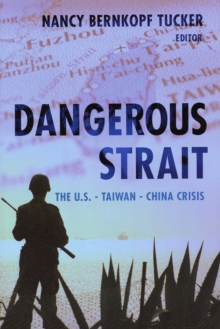 Today the most dangerous place on earth is arguably the Taiwan Strait, where a war between the United States and China could erupt out of miscalculation, misunderstanding, or accident.

How and to what degree Taiwan pursues its own national identity will have profound ramifications in its relationship with China as well as in relations between China and the United States. Events late in 2004 demonstrated the volatility of the situation, as Taiwan's legislative elections unexpectedly preserved a slim majority for supporters of closer relations with China.

Taking change as a central theme, these essays by prominent scholars and practitioners in the arena of U.S.-Taiwan-Chinese relations combine historical context with timely analysis of an accelerating crisis.

Moving beyond simplistic explanations that dominate discussion about the U.S.-Taiwan-China relationship, Dangerous Strait challenges common wisdom and approaches the political, economic, and strategic aspects of the cross-Strait situation anew.

The result is a collection that provides fresh and much-needed insights into a complex problem and examines the ways in which catastrophe can be avoided.

The essays examine a variety of issues, including the movement for independence and its place in Taiwanese domestic politics; the underlying weaknesses of democracy in Taiwan; and the significance of China and Taiwan's economic interdependence.

In the security arena, contributors provide incisive critiques of Taiwan's incomplete military modernization; strains in U.S.-Taiwan relations and their differing interpretations of China's intentions; and the misguided inclination among some U.S. policymakers to abandon Washington's traditional policy of strategic ambiguity.