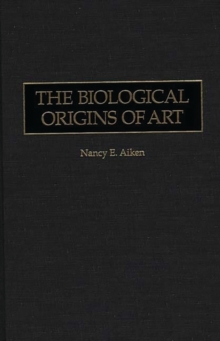 The Biological Origins of Art Hardback

Beginning with Plato, philosophers have theorized about art, asking What is art? and How does art evoke emotion? Their answers, evolving from Plato's Idealism, have led to Nihilism.

Art cannot be defined is the current answer to the first question, and the second has not been dealt with in any significant way since Langer's Feeling and Form in 1953. How art affects our emotions is considered not from a philosophical viewpoint but from an evolutionary standpoint.

How are emotions aroused? is a biological question, and, as Aiken clarifies, it has been answered by neuroscientists.

Art is usually thought of as pleasurable, but it can be ugly, disgusting, or fearsome.

Aiken argues that fear, for example, can be elicited by simple shapes, lines, colors, or sound.

Rather than just a source of pleasure, Aiken shows how art becomes a powerful tool of social and political manipulation.

Through art, people can be conditioned to fear leaders, nations, gods, and ideas.

A provocative work of interest to scholars and researchers as well as all people interested in art and human behavior.