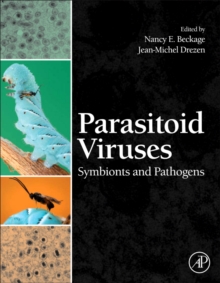 Parasitoids are parasitic insects that kill their insect hosts in immature pre-reproductive stages.

Parasitoids are employed in biological control programs worldwide to kill insect pests and are environmentally safe and benign alternatives to chemical pesticides.

As resistance to chemical pesticides continues to escalate in many pest populations, attention is now refocusing on biologically-based strategies to control pest species in agriculture and forestry as well as insect vector populations that transmit human and animal diseases.

Parasitoids are an economically critical element in this equation and 'integrated pest management.' Viruses have evolved intimate associations with parasitoids, and this book features sections on both symbiotic viruses that are integrated into the wasp's chromosomal DNA (polydnaviruses) that play critical roles in suppressing host immunity during parasitism.

A separate section with additional chapters on viral pathogens that infect parasitoids to cause disease and act as detrimental agents that limit effectiveness of wasp species employed in biological control of pests is also featured.

A third component is a section on parasitoid venoms, which are of interest to the pharmaceutical and medical communities as well as insect-oriented biologists.