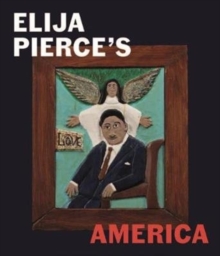 Elijah Pierce (1892-1984) was born the youngest son of a former slave on a Mississippi farm.

He began carving at an early age when his father gave him his first pocketknife.

Pierce became known for his wood carvings nationally and then internationally for the first time in the 1970s.

Accompanying a major exhibition at the Barnes Foundation, Philadelphia, this publication seeks to revisit the art of Elijah Pierce and see it in its own right, not simply as 'naive'. Elijah Pierce made his living as a barber; he was also a qualified preacher.

Just as his barber shop was a place for gossip and meeting, so his art reflects his own and his community's concerns, but also universal themes.

Through his carvings Pierce told his own life story and chronicled the African-American experience.

His subjects ranged from politics to religious stories but he seldom distinguished the race of his figures - he thought of them as everyman.

His secular carvings show his love of baseball, boxing, comics and the movies, and also reflect his appreciation for American heroes who fought for justice and liberty. In 1932, Pierce completed 'the Book of Wood', which he considered his best work. Originally carved as individual scenes, the completed 'Book' tells the story of Jesus carved in bas-relief.

He and his wife Cornelia held "sacred art demonstrations" to explain the meaning of the Book of Wood. Pierce's work was first appreciated in the art world thanks to a fellow sculptor, Boris Gruenwald, who saw the expressive power of his work.

As a later critic wrote, "There are 500 woodcarvers working today in the United States who are technically as proficient as Pierce, but none can equal the power of Pierce's personal vision".

The vast majority of his work is now held in Columbus, Ohio, which had become his home town. This book revisits Pierce's art seeking to see it in its own right, and not simply as 'naive'.

Another critic wrote: "He reduces what he wants to say to the simplest forms and compositions.

They are decorative, direct, bold and amusing. He uses glitter and all kinds of devices to make his message clear.

It gives his work an immediacy that's very appealing" - an appeal arising from a sophisticated art with its own particular voice.