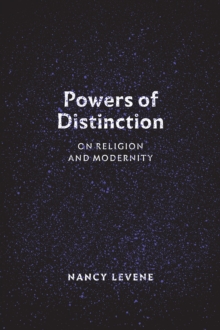 Powers of Distinction : On Religion and Modernity Paperback / softback

In this major new work, philosopher of religion Nancy Levene examines the elemental character of modernity and religion.

Deep in their operating system, she argues, are dualisms of opposition and identity that lead to social and personal dead ends.

But alongside them we also find a hidden dualism that of mutual relation which it is our task to cultivate.

In one system, the perennial dualism of the one and the many, the terms are either opposed or identified.

In the other system, the terms are held in a relation of mutuality.

In readings from Abraham to the present, Levene recovers this distinction, showing how it liberates thinking and politics and renews modernity's most innovative ideals- democracy, criticism, interpretation.

From Abraham we get the biblical call to give up tribal belonging for covenantal relation.

Modernity, which Levene argues encompasses Abraham's call, bequeaths the political work of constituting collectives with a critique of all that divides self from other, us from them. Drawing on a long tradition of thinkers and scholars even as she breaks new ground, Levene offers here nothing less than a new way of understanding modernity as an ethical claim about our world, a philosophy of the powers of distinction to include rather than to divide.