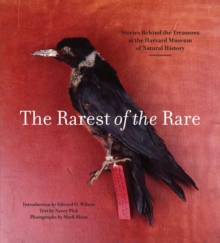 Rarest of the Rare: The Stories Behind the Harvard Museum of Natural History Paperback / softback

Where do you find Nabokov's butterflies, George Washington's pheasants, and the only stuffed bird remaining from the Lewis and Clark expedition?

The vast collections of animals, minerals and plants at the Harvard Museum of Natural History are among the oldest in the country, dating back to the 1700s.

In the words of Edward O. Wilson, the museum stands as both "cabinet of wonder and temple of science." Its rich and unlikely history involves literary figures, creationists, millionaires, and visionary scientists from Asa Gray to Stephen Jay Gould.

Its mastodon skeleton - still on display - is even linked to one of the nineteenth century's most bizarre and notorious murders. The Rarest of the Rare tells the fascinating stories behind the extinct butterflies, rare birds, lost plants, dazzling meteorites and other scientific and historic specimens that fill the museum's halls.

You'll learn about the painting that catches Audubon in a shameful lie, the sand dollar collected by Darwin during the voyage of the Beagle, and dozens of other treasures in this surprising, informative, and often amusing tour of the natural world.