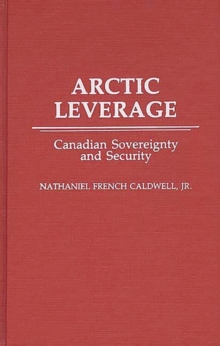 Sovereignty has been a major and obsessive ingredient in Canadian defense policy.

How have territorial sovereignty concerns affected Canadian defense policy and its defense relationship with the United States?

With the Arctic Archipelago, Canada possesses a geostrategic buffer between two superpowers, and claiming jurisdiction over its waters, has run afoul of U.S. policy that designates the Northwest Passage as a strait vital to the interest of the United States.

A valuable study for defense policy experts and strategic policy makers, this volume explores the fascinating role strategic real estate (the Arctic) plays in defense relationships. Arctic Leverage is the first thorough study of the interrelationship of Canada and the United States with respect to the Arctic.

Taking an historical perspective Caldwell covers: the establishment of sovereignty in the Arctic Archipelago; motivation for and establishment of the U.S./Canadian defense relationship; the role of territorial sovereignty in defense policy; the strategic significance of the three ocean concept; sovereignty and security implications of announcing and then writing off the nuclear submarine program; and the 1987 White Paper after Canada's 1989-90 budget cuts.