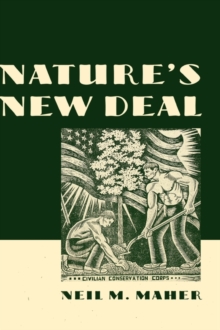 Nature's New Deal : The Civilian Conservation Corps and the Roots of the American Environmental Movement Hardback

The Great Depression coincided with a wave of natural disasters, including the Dust Bowl and devastating floods of the Ohio and Mississippi rivers.

Recovering from these calamities-and preventing their reoccurrence-was a major goal of the New Deal. In Nature's New Deal, Neil M. Maher examines the history of one of Franklin D. Roosevelt's boldest and most successful experiments, the Civilian Conservation Corps, describing it as a turning point both in national politics and in the emergence of modern environmentalism.

Indeed, Roosevelt addressed both the economic and environmental crises by putting Americans to work at conserving natural resources, through the Soil Conservation Service, the Tennessee Valley Authority, andthe Civilian Conservation Corps (or CCC).

Millions of Americans devoted themselves to a new vision of conservation, one that went beyond the old model ofsimply maximizing the efficient use of natural resources, to include the promotion of human health through outdoor recreation, wilderness preservation, and ecological balance. And yet, as Maher explores the rise and development of the CCC, he also shows how the critique of its campgrounds, picnic areas, hiking trails, and motor roads frames the debate over environmentalism to this day. From the colorful life at CCC camps, to political discussions in the White House and the philosophical debates dating back to John Muir and Frederick Law Olmsted, Nature's New Deal captures a key moment in the emergence of modern environmentalism.