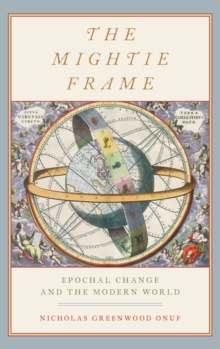 The Mightie Frame : Epochal Change and the Modern World Hardback

Inspired by Michel Foucault's The Order of Things, this book tells a story about epochal change in the modern world.

Like Foucault, Nicholas Onuf is concerned with how we moderns think about ourselves and our world, but in this book he emphasizes the conceptual links in the ways we think, talk, get things done, conduct ourselves, and run societies, from age to age.

As with his previous work, Onuf emphasizes the "rules for rule" that have solidified over timethrough repeated behaviors that work themselves out into a system of social uniformity and hierarchy.

Rules set out who is a member of society, establish goals, provide opportunities to act, and dictate who sits on top - in other words, what any political society looks like in a particular time and place. This book looks at the political society that has evolved since the Renaissance, or what might be called "the modern world," in order to consider what is yet to come.

Onuf argues that modernity, although consisting of a succession of epochs or ages separated by great ruptures, has continued to change within the confines of a "mightie frame" (a turn of phrase he borrows from John Milton).

Epoch by epoch, this frame has linked the limits of our knowledge, a la Michel Foucault, to conditionsof rule, and it points to a plausible ethics for what comes next.

But unlike Foucault, Onuf argues that modernism marked an end to societal and political transitions, and that we have entered a period during which established conditions of rule are likely to be reinforced - and the mighty frame will growever mightier.