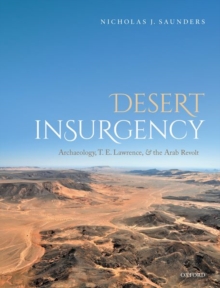 In the desert sands of southern Jordan lies a once-hidden conflict landscape along the Hejaz Railway.

Built at the beginning of the twentieth-century, this narrow-gauge 1,320 km track stretched from Damascus to Medina and served to facilitate participation in the annual Muslim Hajj to Mecca.

The discovery and archaeological investigation of an unknown landscape of insurgency and counter-insurgency along this route tells a different story of the origins of modernguerrilla warfare, the exploits of T.

E. Lawrence, Emir Feisal, and Bedouin warriors, and the dramatic events of the Arab Revolt of 1916-18.

This unique and richly illustrated account from Nicholas Saunders tells, in intimate detail, the story of a seminal episode of the First World War and the reshaping of the Middle East that followed.